Deck safety awareness is an important topic for anyone that owns, resides in or visits properties that include the desirable feature of a deck or balcony; yet a topic that often gets a mere nod of acknowledgement but little focussed effort.

Decks are traditionally a favourite place to gather, particularly in the summer months, and each year we hear of people suffering needlessly from trauma and injuries resulting from deck collapse. Just within the last few weeks alone there were two reported deck collapse incidents.

On May 16, 2015 in Lithonia, GA there was a sudden deck collapse when friends and family were gathered after a wedding, injuring 9 people – 7 of whom were hospitalized. Officials say that old, dry-rotted wood that was only held up by nails and not proper fastening bolts were the main contributors. 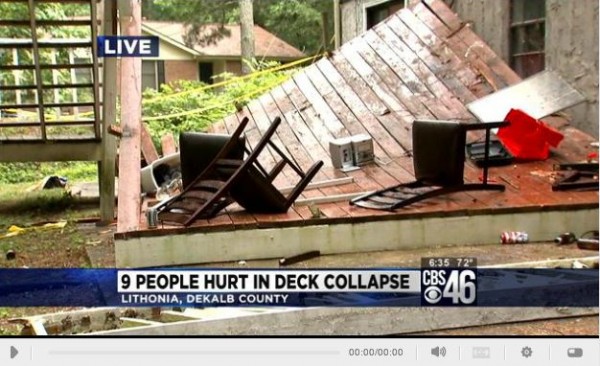 Viideo coverage was on CBS46 News.

This wide-spread, ongoing issue prompted the North America Deck & Railing Association (NADRA) to launch the Check Your Deck initiative and designate May as annual Deck Safety Month. Duradek is proud to be a Deck Safety Ambassador to help further awareness of deck safety issues and to encourage both consumers and builders to use the excellent free resources for deck safety that NADRA offers on their website.

Valuable tools like the Deck Evaluation Form and Consumer Checklist can help you to identify the trouble areas to ensure your deck is not at risk of collapse. Using these tools and taking the steps necessary to check your deck goes a long way to ensure the safety of your family and friends.

Just ask consumer deck safety advocate Jeremy Wilt has been educating the public after he and his family experienced a traumatic deck collapse a year and a half ago. Jeremy has taken on the mission to spread the message of safety and prevention through a series of YouTube videos. The video from WMC Action News featured below shows shocking footage of the collapse that occurred at the clubhouse of Wilt’s New Albany subdivision during a Christmas Party.

Other recent deck collapse incidents include:

On April 20, 2015 in Knoxville, TN a balcony collapsed at an apartment complex sending 1 woman to hospital and prompting an emergency repair work order on 100 other decks in the complex which were very old, wooden decks not well-maintained. 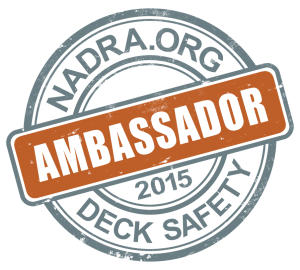 As Deck Safety Ambassadors, Duradek would like to remind you that maintaining a wooden deck by resealing each year is not just for aesthetic purposes…it is to keep the wood protected and reduce the chance of water infiltration and wood rot.

To reduce the time, effort and cost on deck waterproofing maintenance, consider the advantages of Duradek vinyl decks for your home. Duradek will protect the wood of your deck with a completely water-tight seal and Duradek’s professional installation techniques will help protect the entire home by considering the building envelope and preventing water intrusion at the critical areas where deck meets house.

If you’d like to speak to a decking professional about your deck, contact one of Duradek’s trained and authorized installers in your area.