This Baltimore homeowner’s flat roof deck could barely be considered a useable outdoor living area. It had the potential to be a luxurious and desirable feature adding value to the property but instead was unattractive and a source of leaks.

The original roofing membrane was a white TPO. This type of membrane is a roofing product only. It is not intended for use as a deck surface.

When the homeowners discovered leaks, they attempted to patch the roof with a rubber product then overlay it with an additional membrane over a small section (about a third of the usable flat roof). The second membrane was applied directly over the existing TPO. It was loose-laid and mechanically fastened to the TPO at the edges.

They attempted to turn that area of the flat roof into a useable deck for leisure use. It was unattractive and outdoor mats did little to make it an enjoyable outdoor living space.

The guardrails were only around the middle portion of the roof covered in the second ‘patch’ membrane. The square footage of usable outdoor living space was considerably limited. Most of the rooftop was inaccessible despite having excellent rooftop access. The flat roof had a ton of potential but was underutilized.

If appearance and usable space were not motivation enough to transform this TPO roof, water leaks made a new roof necessary. Even with patching and layering of roofing membranes, water had bypassed the TPO and second membrane. Water had made it through to the original CDX roof below, which meant rot would develop quickly.

Areas on the flat roof had weakened so much that the substrate had softened and dropped from inadequately sloped sleepers. This lack of slope and poor water routing allowed for plenty of ponding water to escalate the leaking. Even for service access only, some areas of the roof were too dangerous to access.

The homeowners turned to the waterproofing experts at Duradek MidAtlantic who introduced them to the professional Duradek installers from OnTarget Remodeling.

Professional Duradek installers are highly skilled in all waterproofing details involved to create an extended roof deck. First, they removed the old, poorly placed railings. Next, they removed the layers of failed roofing products to get to the original plywood substrate.

Once the plywood was exposed, they could more thoroughly assess the situation. Damaged wood that had begun to show was evident. They removed the rotted wood and replaced the damaged portions of the CDX roof. They also removed moisture damaged OSB board from the curb walls.

The crew installed new tapered sleepers with adequate slope to provide water routing that would eliminate ponding water. Next, they laid new, untreated ¾ʺ exterior grade T&G plywood. They filled all joints and screw holes to provide a completely smooth surface. New plywood was applied to rebuild the curb walls.

Duradek PVC membranes are classified as both a roofing membrane and pedestrian traffic surface. It allowed the team at OnTarget to cost-effectively transform the unattractive flat roof into a beautiful deck with a single product solution.

Duradek Legacy Driftwood vinyl was applied to the substrate using contact adhesives. The 6 ft widths of vinyl were overlapped by 3/4 inch and heat-welded together for a water-tight seal. The vinyl extended to the top of the curb walls. Then they finished the curb walls by capping them. The membrane was mechanically fastened in place using termination bar with butyl tape backing at the 90-degree turn at the inside perimeters. They applied the vinyl vertically 6 – 8 inches up the ‘dog house’ rooftop access under the siding.

A Duradek installation always involves running the membrane up the inside perimeter walls of a deck. Duradek treats all vertical surfaces like walls, including posts and columns, to ensure complete protection of the building envelope. In this case, the ventilation pipes were wrapped at the base and sealed with caulking.

To complete the project, the crew installed Durarail white picket aluminum railings at the extended perimeters of the roof deck. Now, rather than have a third of the flat roof to use, the homeowners could use nearly the whole roof as a deck. 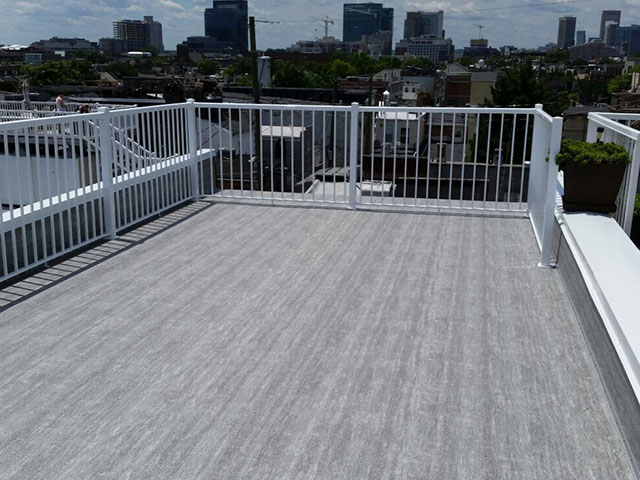 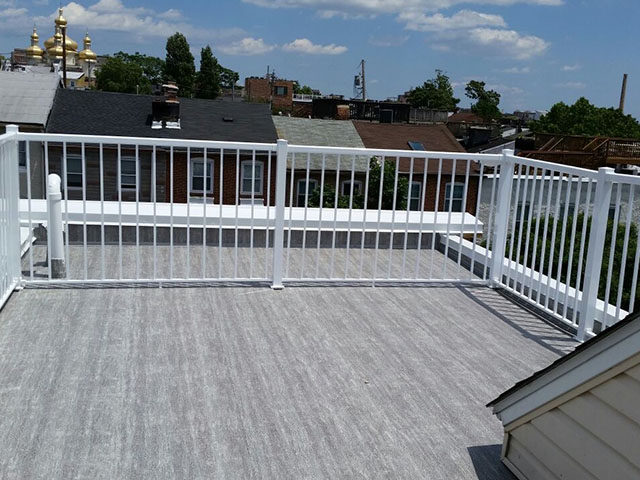 The result of this project is that previously wasted space that created an environment for moisture damage was completely transformed. There is now a large, reliably protected roof deck with three times the usable outdoor living space.

Duradek membranes are ICC Evaluated and meet building code as both roofing membrane and walking surface for confidence that the living space below is protected. The extended roof deck provides a luxurious residential area where the homeowners can relax or be proud to entertain guests. The reliable waterproofing for the building, and the quality of life for the homeowners, make the project a worthwhile value-added investment. 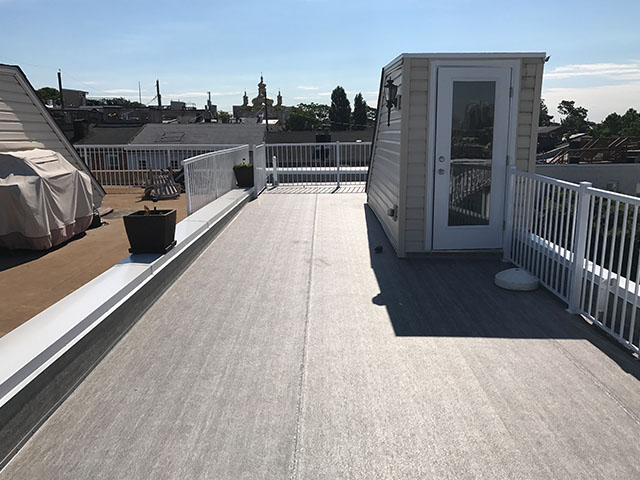 Duradek does not require recoating like other roofing products. Due to excellent elasticity, it expands and contracts with the substrate. It will not crack like some roofing products or liquid applied membranes. That means water does not have the same access to the substrate or points of vulnerability like doorways and perimeters.

Both Duradek and Durarail are low maintenance. Recoating is not required. All that is needed to keep them looking great is occasional cleaning. By choosing Durarail to complete the Duradek deck, the homeowner gained assurance that the railing installation included consideration to the integrity of the waterproof membrane. That also allowed the building owner to have a single source for their product warranties.

View or download the .pdf version of Case History #178 with before and after pictures and installer details.

Check out how Duradek compares to other traditional deck and roofing systems.

May is Deck Safety Month – Have You Checked Your Deck?