Duradek, the ALS Ice Bucket Challenge and the Vinyl Bucket

There is a delicious irony when people who have dedicated their lives to waterproof protection are doused with ice-cold water.

That’s exactly what happened this week at Duradek’s headquarters in Surrey, BC when Duradek’s owners and sales managers took the Ice Bucket Challenge for ALS. 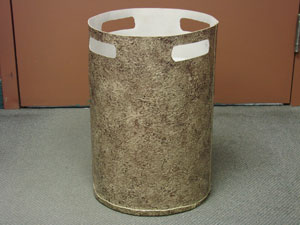 It is a beautiful thing to see a fundraising effort take off so strongly and spread so widely.   If only a fraction of the people who participated in the awareness portion by publishing YouTube videos of the dumping cold water over their heads have donated funds, it’s no wonder that the ALS Ice Bucket Challenge campaign has more that reached it’s goal. Duradek staff members raised nearly $100 to see their managers participate, and John and Bob Ogilvie generously donated $500 on behalf of all of the 4 men who participated at Duradek’s Canadian headquarters on Tuesday, September 2nd.

Of course, as a business participating, we wanted to take the opportunity to show off the strength of our Duradek membrane and how the heat-welded seams completely protect a deck from water penetration. There have been some competitor generated rumours and even an amusing staged video that attempts to infer that Duradek’s seam strength is not as strong as theirs. Well, we can put that myth to rest! One of our talented Duradek installers, Trevor Deighton of Full Deck Restorations, made us a bucket constructed of Duradek Ultra Cork Macchiato.  Duradek’s roof grade waterproof protection was able to hold approximately 4 gallons of water without showing any signs of stress on the seams, so you can be certain when it is laid on your roof deck or balcony that it is water-tight!

Here is a video compilation of all of our participants; and below you will find links to their individual videos to hear who they nominated to forward the ALS Challenge to keep the awareness and fundraising going. Thank you to all for participating!