Dry Below Decks Made Easy – Part 1: Trough vs. Top 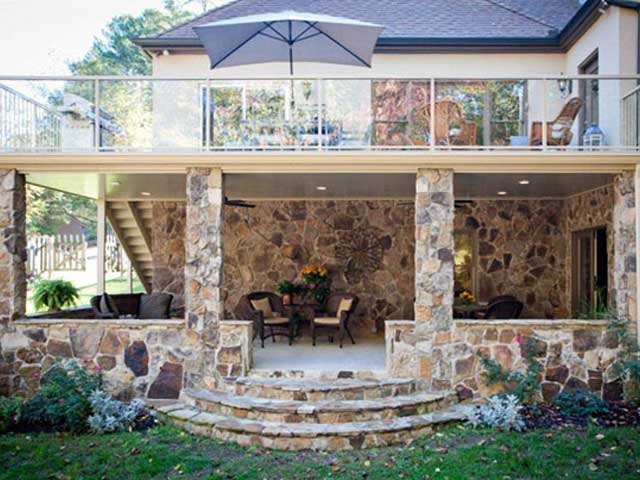 They say there are two sides to every story, but when it comes to 2nd level decks acting as a roof for a patio below, you only need a one-sided solution – Duradek vinyl membranes.  You don’t need the expense of an under deck drainage system if you have a deck surfaced with Duradek.

For an investment as large as residential properties, maximizing usable space is on the top of most home owners’ lists. It is certainly important to developers and designers who want to maximize the value of the homes for their clients.  With the ever-growing demand for more outdoor living space it only makes sense to maximize space by turning an upper level deck into a roof for a lower level deck below.

Duradek vinyl deck membranes are the perfect solution as they serve as both the pedestrian deck surface and the roofing membrane in one single product application that completely considers protecting the building envelope. Under deck systems only serve as a water routing system (and sometimes a ceiling for the lower level deck) so you still have to consider the exposed surface(s) of the upper level deck separately.

There are two basic types of under deck drainage systems.

Both of these systems function by allowing water to get through the upper level deck surface and then routing it between the joists to downspouts or gutters; neither system provides complete water-tight protection for the joists, fastening points, supporting beams or building envelope. Water is routed away, but moisture is still present and lack of air flow just traps that moisture between the surface of the upper deck and the roof of the lower deck. While some installation methods will rely on caulking or butyl tape to seal seams, you are unable to inspect if those seals remain intact as they are inaccessible once the deck is complete. 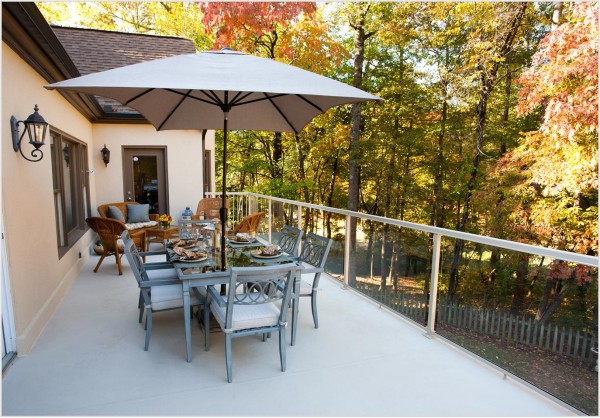 The deck in the image above has the advantage of a low maintenance Duradek PLUS roof grade waterproofing for the lower deck. (See the image at bottom of this page to view the lower level deck)

A Closer Look at Dry Below Deck Trough Systems

When the trough systems are installed, the material is usually not run up the siding of the house which means the building envelope is not completely protected and it is possible for moisture to find its way through, risking wood rot where the deck meets the house.

Another issue with the trough systems is that it is dependent on the area between the joists to allow the proper slope to route the water away. With a ceiling on a lower level deck, most people will run some sort of piping or conduit for electrical purposes and the placement of those may form damming or tenting causing an interruption of water flow and trap moisture. 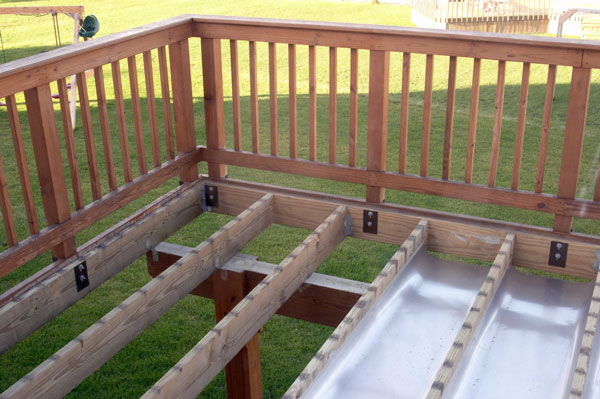 A trough style under deck drainage system can not be installed on an existing deck without disassembling it.

A soffit system to serve as the ceiling on the lower level deck would have to be installed to conceal the troughs and joists. If any moisture has gotten past the trough it can become trapped within the joists and soffit system below with little airflow.

Finally, once a dry below trough system is completely finished, the upper level deck surface needs to be installed. At this point the fasteners puncture the trough membrane from above and may allow moisture into the joist area…but you will never know about it until you have a leak because it is completely buried between surface and soffit.

Why Duradek is the Best Choice to Keep it Dry Below

Duradek is a PVC membrane system and has been waterproofing decks since 1974. Duradek is CAN/CGSB, CCMC and ICC approved as a pedestrian traffic coating and a roofing membrane. It is installed in a single application providing warrantied waterproof protection for 10 years, while its traditional service life reportedly averages 20+ years.

Duradek’s installation methods consider the critical details required for secure waterproof protection of the building envelope. Since those waterproofing details are so important in protecting the home, Duradek is only installed by trained and authorized installers.

Duradek is adhered directly to the plywood or concrete deck surface and all seams are heat-welded to ensure no water can ever penetrate. The membrane is run up the inside perimeter of the deck (recommended 6 inches) against the exterior of the building before the flashing details are added. 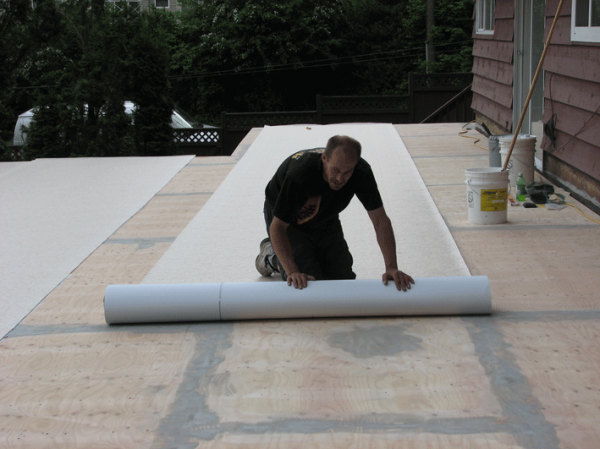 The professional installers of Duradek Vinyl know details to consider from beginning to end.

Water is managed by a 1” in 12” surface slope to the outside edge. Depending on the type of deck, waterproofing details such as edge flashing, drains, scuppers and a gutter system is included if required. All of these waterproofing details are heat-welded to be completely sealed. The perimeter edges can be caulked as they are accessible for annual visual inspections. There is no room for water infiltration with a Duradek system.

Once installed, Duradek reliably provides you a roof for the lower deck below and the walking surface for the upper level deck. On the lower level, the joists are still exposed but with open air flow they are not vulnerable to static water and any moisture will naturally evaporate. If you would like an enclosed ceiling and lighting installed for your lower level deck, the area between joists is completely dry and clear of obstruction for the addition of conduits and a soffit system.

Of the many reasons you might want to create a dry area below your upper level deck, choosing one of Duradek’s beautiful designer finishes offers the best choice for low maintenance decking that doubles your usable outdoor living space. 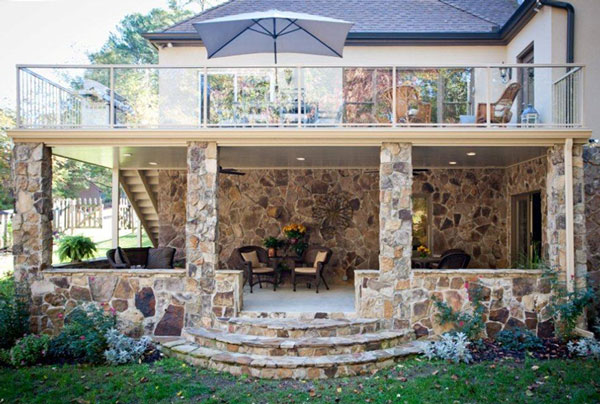 An outdoor liesure room is provided with the roof grade waterproof protection above with Duradek.

Check back next week when we take a close look at the second type of under-deck drainage systems – Panel Systems.