Deck Autopsy: The Cause of the Collapse

Two weeks after the high profile deck collapse in Ocean Isle Beach, NC the speculation continues on what caused the sudden collapse that sent 21 family members to hospital after attempting a group photo on the deck of the ocean front vacation home. While 25 family members were gathered on the deck, it suddenly gave out and everyone from the infants to the elderly crashed down with the debris to the concrete patio below. Fortunately, there were no fatalities but several traumatic injuries left this family with far different vacation memories than they were hoping to create.

There are several theories on what may have caused the deck to collapse and while this is not a forensic report of the actual cause on this particular collapse, we are going to look at the possible contributors and what you can do to prevent this kind of tragedy on your deck.

Not Built to Code – Not Likely

This deck was inspected when it was built in 2003 so it was built to state building code laws. Although further deck inspections are not a legal requirement unless requested, Ocean Isle Beach Mayor Debbie Smith says, “These oceanfront decks need to be held to a higher standard than North Carolina laws require.”  This comment addresses the environmental contributors for decks in any coastal community such as high salt content in the air and heavy winds.

While the possibility of too much weight for the deck has been discussed, in the case of the Ocean Isle Beach collapse it is unlikely. North Carolina Building Inspectors Association President Glenn Batten says that the deck should have held that many people. State law requires a deck to be built to support 40 lbs. per square foot, but to accommodate other features like hot tubs or heavy planters, decks are often built to accommodate 50 – 100 lbs. per square foot.

Glenn Batten goes on to say that the fact the deck collapsed tells him the deck may have suffered hurricane damage. Fasteners could have been pulled and stretched to their limits. While this is not necessarily the main contributing factor in this case, again it brings the environmental factors into the equation where heavy winds and salt air can age a deck much quicker than in inland areas and require more maintenance and commitment to regular annual inspections.

The video footage of the resulting collapse of this deck seems to indicate that the ledger board and framing of the deck remained intact, but the central collapse of the deck boards indicates that supporting joists were the most vulnerable.

Contributing Editor for Professional Deck Builder Magazine, Kim Katwijk has been tracking deck collapses for 4 years and researching back a further 9 years. Kim says there are two main reasons for deck failures.

1 – The ledger: (the board that runs parallel to the side of the house and supports the edge of the deck, securing it to the house) is just nailed onto the house. Half the weight of the deck is on the ledger board and nails have a tendency to slide out over time. 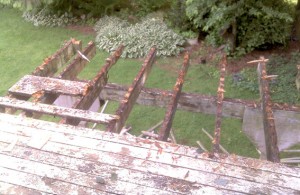 All wood – even treated wood – will rot if not protected. Wait too long to waterproof your wood deck, and you will be rebuilding it

2 – ROT!: Decks that have not been built correctly or have not been maintained are more susceptible to damage and weakening due to rot. Look for rot’s discoloration in the lumber or anything growing out of the wood. Test for rot by stabbing the wood with a sturdy knife point. If your knife goes in more than one quarter of an inch or you find spongy spots, that means the wood is decaying. If only a few boards are damaged, replace them. You cannot get away with leaving the rotten boards and putting a new board beside it. This will only accelerate the rot by providing fresh food for it. The rot will quickly invade the new board. If you find soft spots in the support posts or beams, you will need to rebuild the deck. (This requires a building permit.) To minimize future problems, hire a professional that specializes in decks.

( * see link at the bottom of post for helpful tips on selecting a decking contractor.)

Kim Katwijk also advises, “Assess whether the structure is solid. When you walk on the deck, you should not feel it move. It should not tilt. The railing should be firm and not moveable. The fasteners should not be loose or corroded. If you own a wood deck, you should clean and seal the boards every year.” If annual maintenance like sanding and sealing your wood deck is not something you can realistically commit to performing, you may want to consider an alternate option that has proven successful waterproofing results to keep your deck safe from wood rot.

Keep Your Deck Safe From Wood Rot With Duradek 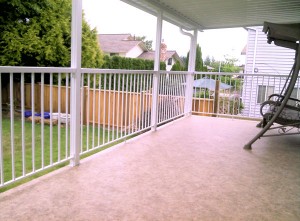 The waterproof protection of Duradek vinyl membranes allow you to enjoy a maintenance free deck without the worry of water damage or wood rot.

Duradek, the original vinyl waterproof membrane has been protecting decks, balconies and roof decks in all North American climates for nearly 40 years. Whether your deck is over living space or over a patio below, Duradek is building code approved as a walkable roofing membrane.  Using a Duradek professionally installed waterproof membrane means that not only is the area under your deck completely protected, but water is kept out of the entire deck structure, which Prevents Rot from being able to occur!

Duradek Ultra vinyl membranes provide an attractive walking surface and superior waterproofing performance in a one-time application. It is warrantied to last for 10 years and is known for a life expectancy that can double that, with no sanding, staining or re-coating required. The only thing you need to do to keep your Duradek looking great is a seasonal cleaning (in addition to the annual inspection you should be performing no matter what type of deck waterproofing you use).

Additionally, Duradek is available only through a network of trained and authorized installers that are well-versed in the intricacies of professional deck waterproofing. If you would like to get a free estimate on protecting your outdoor living space and keeping your deck safe, contact a Duradek dealer near you.