The project entailed an addition to a home for a playroom and a games room to house a golf simulator. In most cases, an addition is not a big head scratcher for builders, but in this case, the addition was to the basement. This meant that the ground had to be dug up, new foundation poured, and reinforcement to the foundation of the original structure had to be added before they could even start with the construction of the new rooms of the home. 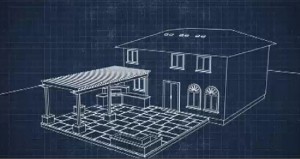 Once the challenge of the initial construction of the subterranean addition to the home was complete, the second phase of the project could begin. In this part of the project, the crew was building a gorgeous outdoor living space with a cooking area and lounging area, all to be covered with beautiful outdoor tile…and all of this is directly over top of the basement addition. 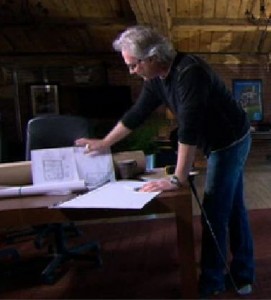 Jim Caruk carefully reviewing the plans for the project

So for all appearances from the outside, the home just gained the addition of a new patio area. But in this case, the patio acts as a roof over the new addition of the home which means that the waterproofing is a critical feature for protecting the entire project. There is no room for guesswork and no margin for error. The success of the entire project and the investment put into this home is dependent on the performance of the waterproofing system to ensure the new construction is protected from the elements and protected from the many risks to a structure with inadequate waterproofing. 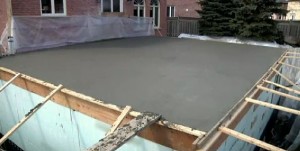 When there are projects with unique factors that challenge even the most experienced contractors, builders know that they need a product that will perform as intended. When Jim Caruk chose to use Duradek Ultra Tiledek for his waterproofing needs, it was not by chance. It was a very thought-out decision based on Tiledek’s performance as an effective waterproofing membrane underneath outdoor tile. 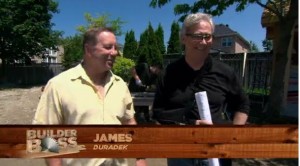 Knowing that Duradek Ultra Tiledek is a superior waterproofing membrane from the reliable Duradek family of products that has been providing exterior waterproofing on decks and balconies for nearly 40 years may have helped make the decision to use it on this project. However, the most critical detail that made Duradek Ultra Tiledek the best product for this project is the fact that the Tiledek vinyl membrane is roofing approved as a pedestrian waterproof membrane in North American building codes. The fact that Duradek Ultra Tiledek also comes with a 10-year waterproofing guarantee may have made this the easiest product choice ever for Jim Caruk on this project. Installed by authorized Duradek installer Mike McGowan of HTR Duradek, ‘the Bunker’ episode of Builder Boss gives viewers a glimpse of how easy a professional installer can make laying a waterproof vinyl look.

Laying out the vinyl and applying the adhesive 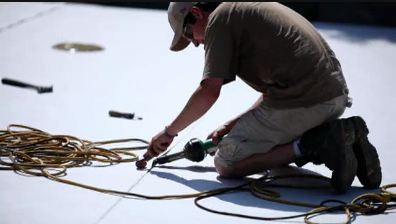 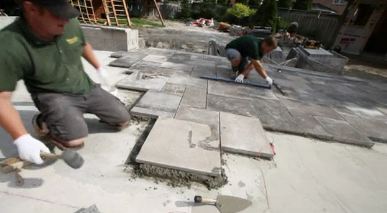 Laying the tiles over the Tiledek membrane

To view the full video of ‘The Bunker’, visit HGTV’s Builder Boss episodes online and enjoy the insight into a builder’s challenges on this unique and interesting project. Watch for Duradek Ultra Tiledek installation at 15:08 into the episode and see why Jim Caruk offers thanks to the installers of Duradek. In only a few seconds you can get some insight into how Tiledek is laid and what Jim Caruk has to say with Duradek Distributor Jim Simpson of Raildek in Ontario. 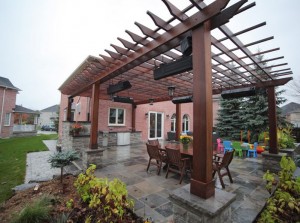 The final reveal of the new tile patio on Builder Boss – ‘The Bunker’.