Over 20 years ago, an additional room on this home was built with the desirable feature of a roof deck.

Originally, the deck was waterproofed with a tar and bitumen and covered with an overlay product that was not entirely compatible with the bitumen. 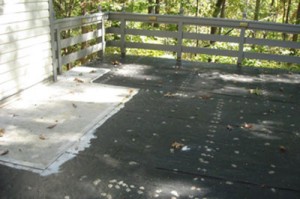 Another problematic area was the flashing details which failed and resulted in the edges of the deck weakened due to water infiltration. Additionally, some of the supporting joists were bowing. the homeowner wisely decided it was time to have the deck resurfaced and avoid more costly damage. 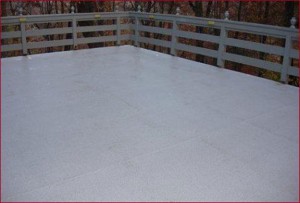 The original material was quite difficult to remove, but eventually it was cleared off the deck to allow access to the substrate. the bowing joists were lowered to allow for an even surface.

Most of the substrate was able to be saved, however sections along the perimeter could not be salvaged and was replaced with 3/4″ plywood.

Duradek Ultra Granite Chip vinyl was installed and proper flashing details added to all of the perimeter of the deck to ensure the substrate stays fully protected.

When doing deck renovations, it is often difficult for contractors to fully identify the extent of possible water damage until the old waterproofing system has been removed and they can conduct a full assessment of the structure below.

Sometimes on roof decks, the water damage is so bad that even the vertical walls require replacement, while in other cases, like this one, water damage only affected a limited area of the existing substrate.

View or download the .pdf version of Case History #149 for the complete case history with installer details and before and images.