The Problem: Failed Deck Damages from Water Leaking into Bedroom from Roof Deck

A high-end four-story/six-unit condo building had water leaking into a master bedroom below the upper tile deck. The tile installer contacted Duradek of Georgia for help. The initial inspection did not show any areas of damage so there was not a clear path to the leakage. An investigative estimate was offered to the homeowner but was declined.

A year later, a desperate homeowner now had continuing leaks from the upper deck and the lower deck was also failing and becoming soft due to rotting wood. This time an investigative inspection was completed.

After complete removal of the surface tiles on both the upper and lower decks, it was determined that the upper deck had failed due to poor details around the railing posts and fireplace. The lower deck was a tile assembly failure with a substandard subfloor.

Due to the previous expensive problems with the tile surfaces on both decks, the owner wanted to take a different approach and use tiles with pedestals for a floating tile system (where the tiles would not be glued down). That type of pedestal system would allow for easier repair or replacement if needed. This is where  Duradek’s Plazadek System comes in.

Duradek of Georgia advised the owner that with Duradek’s Plazadek System, any water or moisture that passed through the tiles would drain off the deck without ever reaching the substrate, eliminating the risk of damage to the deck structure and the building below.

First, the substrate on both decks was replaced. Untreated T&G 3/4 inch plywood was installed on the upper deck and was properly prepared for the membrane application.  The lower deck was rotted and also needed to be completely rebuilt to new building codes. After the structural repairs, the Duradek membrane was installed.

Duradek waterproofing products are only available by trained, authorized deck and flat roof waterproofing professionals. The level of a Duradek installer’s skill in this specialty ensures the installation is completed with an appropriate slope, drains, and other water routing details.

Once the membrane was installed, the tile installer could get to work immediately as Duradek membranes do not require any drying or curing time. The tile was installed by the use of pedestals to support the stone tiles using Duradek’s recommended assembly details for the Plazadek system. This allows water to pass through the tiles and drain off the membrane without any moisture reaching the deck structure.

Duradek membranes used in a floating application with the Plazadek System protects the structure from moisture – even if surface damage occurs to tiles or pavers above occurs. There is no need to worry about issues with the high cost associated with failed deck damages that can affect multiple areas of the building.

View or download the .pdf version of Case History #183 with project photos and installer details. 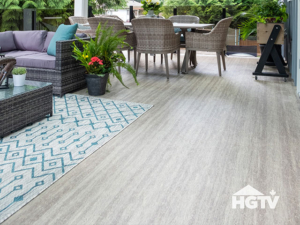 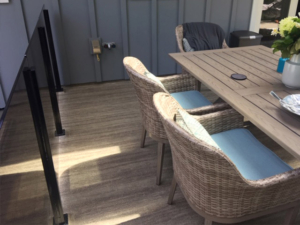