Neglected Maintenance Suspected Cause of Deck Collapse in Halifax

Most reported decks collapse stories are generated from traditional slotted wood decks that have not been properly waterproofed built and maintained.

Cut to the Chase: Reduce Liability with Less Maintenance Time and Cost

Screen Shot of images from Google search on ‘Deck Collapse’.

What’s Happening to Decks in Halifax? 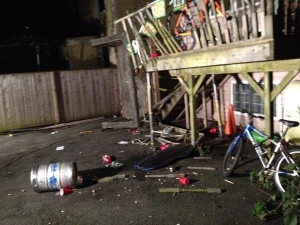 According to CBC News show, statistics show that one in ten decks fails inspection in the Halifax Regional Municipality, but some experts say the percentage is likely much higher.

HRM’s manager of building standards, Matt Covey said, “There’s a lot of times we go out and somebody’s not building something the way they said they were going to build it and it doesn’t meet code.”
Darren Smith, who runs Halifax Home Inspections, says the percentage of faulty decks he sees in the city is considerably higher than the city’s estimate.

“I’m saying more like 60 or 70 per cent [of decks are faulty] and I think I’m accurate on that just because it’s what I do every day,” he says. “Most of the decks built horrible are ones that someone has done themselves.”

In September, a third-storey deck collapsed, landing on another deck below during a house party in Halifax’s south end, sending six of the seven people occupying it to hospital. 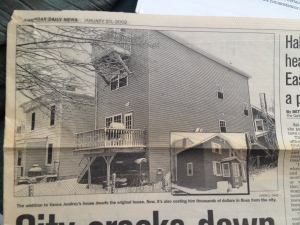 A newspaper clipping from 2002 shows the deck of the house was part of a controversial addition to the original home. (Daily News clipping)

An interesting note is that the deck of the house was part of a controversial addition to the original home in 2002, according to court documents and an article by the now defunct Halifax Daily News.

This precedes the more stringent requirements for all recently build decks brought in by the HRM in 2008.

According to the Halifax Regional Municipality’s bylaws, homeowners have to seek a permit when they construct a new deck or renovate an existing one. Inspectors examine it twice: once before the deck is built and again after the deck is complete.

“Those would be the only inspections unless there was a complaint about an issue on site, or if there was a further change to the existing structure,” said Tiffany Chase, a spokesperson for the HRM.
“The ongoing maintenance of those structures and your property as well, really lies with the property owner,” said Chase.

“We do say that people should make an annual inspection of their own deck on site, and if you’re not sure what to look for then you can hire a professional to come in and do that for you.”
Paul Pettipas, the CEO of the Nova Scotia Home Builders’ Association, went to the site to see the damage for himself.

“This was a sad state of affairs,” he said. “In my opinion there was no maintenance done on this deck and the landlord’s responsible.”

The North America Deck and Railing Association (NADRA) is doing its best to reduce the number of deck collapse tragedies and has launched a Deck Safety program that includes a Deck Safety Consumer Checklist for homeowners and a Deck Evaluation Form to assist builders and inspectors in the deck evaluation process. 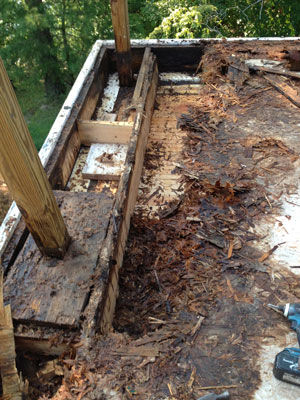 Once wood rot has begun, it will gradually grow until the wood completely deteriorates.

No matter where you live or how carefully constructed your deck is, if it is made of wood, it is vulnerable to wood rot from exposure to moisture. Over time, unprotected wood that begins to rot will gradually deteriorate until it actually crumbles.

That is why waterproof protection is so vitally important to your deck.  It is not just an aesthetic detail…it is a major safety concern.

Six people sent to the hospital is a pretty significant price to pay for neglecting maintenance where an ‘oops, my bad’ simply does not compensate for injury or excuse negligent behavior.

Annual waterproof maintenance can require significant time and cost to maintain which is why Duradek vinyl membranes are such a huge advantage for your outdoor living space. Once a Duradek membrane is installed on your deck, it requires NO maintenance to continue to perform its waterproofing function…it simply does its job.

Last year, Duradek president John Ogilvie joined Duradek’s Atlantic Canada representative, Dennis Dann to visit the job site of a Duradek vinyl replacement when the homeowners wanted to update the look of their home. This particular deck was significant as it was the first deck in Atlantic Canada to have Duradek vinyl installed 30 years prior.

When the old vinyl was pulled off of the deck to make way for the new colour, even Duradek president John Ogilvie was amazed at the incredible condition of the plywood underneath. 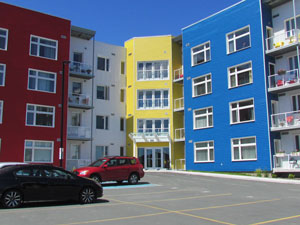 Balconies benefit from the waterproof protection of Duradek and Durarail.

The plywood substrate was so well protected that they were able to re-use the original plywood as the foundation for the new Duradek vinyl being installed. 30 years of waterproof protection from a one-time application with a product warrantied for 10 years is a pretty good return on investment for home maintenance.

Home owners and property managers in Halifax may want to reduce their maintenance tasks and risk of liability by discussing their deck waterproofing options with their local Duradek professionals.

Contact Duradek’s Atlantic Canada Representative, Dennis Dann for more information on one of the authorized Duradek installers in the Halifax area.

In all other areas, visit Duradek’s ‘Find A Dealer’ page to locate a Duradek professional near you.