Duradek Northwest – Raising the Bar on Providing the Roof

Parent company, Washington Alaska Roof Systems, Inc. hit their landmark 30th anniversary in business this year which includes the inception of Duradek Northwest with its now 20 year history as the exclusive Duradek distributor in Alaska, Washington , Oregon and western Idaho and Montana.

The owner of Duradek Northwest, Matthew Whale, has earned a solid reputation as a roof deck specialist; however the path to this distinction was not a direct one. Back in the late 70’s, Matt worked at a sawmill, took a year off to build his house and in 1984 invested time in a friend’s company and started doing some work for him. After two years of working to establish this new business, the friend wanted to pull the plug on the start-up, but Matt knew he had to invest just a little more time to see the fledgling company spread its wings to reveal the foundation that they had been working so hard to build. So he basically did his friend a favor and bought it. This was at the time Washington Alaska Roof Systems. Now, his friend was free from the obligation and Matt was able to prove his instincts right and dig into the early stages of a successful roofing supply company.

Duradek Northwest as a division of Washington Alaska Roof Systems has always been a roofing / waterproofing distributor. They started off representing brands that were established in the east, but were virtually unheard of on the west coast. For 10 years Washington Alaska Roof Systems was a manufacturer’s representative providing products to roofing contractors; and were consistently in the top first, third and fifth position for top sales from the brands they represented.

This determined attitude and pioneering spirit must have called out to the pioneering spirit of Duradek like some mysterious building supply siren song as Duradek’s business development manager at the time, Dick White approached Matt about being a representative of Duradek in the Pacific Northwest. Later, after the newly created Duradek Kansas City office was established he, also heard from Duradek US’s Susan Smith and Steve Jackson who appealed to Matt’s business vision. Duradek’s attentive courtship romanced Washington Alaska Roof Systems into a tentative relationship. A decking product was not something Matt would have added to his product offerings, but Duradek’s unique application as a roofing membrane that also served as a traffic surface was something that had potential.

Matt continued along as a representative of Duradek, but there were things happening in the decking community and competing products to Duradek were basically taken out of the equation which left a huge opportunity for Duradek in the region. Recognizing this opportunity and that Washington Alaska Roof Systems had a superior business model and performance record, 2 years after Duradek Northwest became a representative, Duradek president John Ogilvie was determined to gain the commitment of Duradek Northwest as a distributor for the region. After several lunches and Mr. Ogilvie’s consistent, persistent and valid points, Duradek Northwest became the exclusive Duradek distributor for Washington, Oregon, Alaska and western Montana and Idaho.

Matthew Whale’s knowledge and professionalism are widely recognized in the roofing industry and as true waterproofing expert he is a resource for decking professionals as well. Ideas for Deck Designs featured an interview with Matt Whale so that he could share his insights on the topic of deck building and waterproofing. In this interview, Matt summarizes why Duradek is the best choice for vinyl waterproofing when asked what makes Duradek different. Matt said,

“You will not find greater product consistency or commitment to the proper installation over the entire North American continent. I feel just as comfortable recommending a Baltimore installer or my local Seattle contractor. A good contractor can make a bad product function and a bad contractor can mess up a great product, it’s all about the knowledge.” 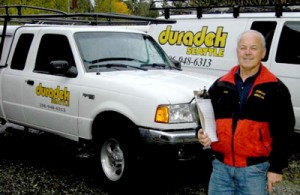 When you want the most reliable waterproofing on your deck, choose an authorized Duradek installer to make sure you are getting the real Duradek!

After a 40 year history, Duradek is confident in its product performance and is proud to work in partnership with its entire authorized network of trained installers to ensure that decks protected with Duradek are made to last.

Duradek Northwest supplies a wide range of Duradek installers with Duradek’s reliable vinyl membrane and decks and roof decks across the Pacific Northwest have a long and beautiful life that stands up to the extreme damp coastal environment. Companies like Duradek of Seattle, Waterproof Deck Company, Whiting Waterproofing, Hanley Construction and Jim Fisher Roofing have earned a solid reputation as reliable installation contractors and will be happy to show you how Duradek can make your deck a place of low maintenance pleasure. 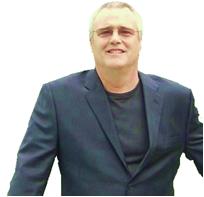 Owner of Duradek Northwest, Matthew Whale has lived in the Northwest all his fifty-two years of life. He is a family man, with his wife Janeen of 34 year, three sons, a daughter and two beautiful granddaughters. He has numerous awards for sales and has served on several prominent waterproofing and roofing manufacturer’s marketing counsels. His background includes lumber mill sawyer and manager, where they specialized in treated post, beams and stringers. He is a carpenter, a certified construction document technician and is factory trained in multiple thermal plastic single-ply, thermal welded and rubberized bitumen membranes as well as being a liquid damproofing, roofing and waterproof coatings representative. He has spent the last twenty-nine years serving the Northwest in his current role as president of Washington Alaska Roof Systems, Inc and Duradek Northwest, a division thereof.