While the well-defined peak season for reported deck collapses has passed (June-August), every summer more deck collapse stories to hit the media with a too-familiar story of unsuspecting folks gathered on a balcony or deck and finding themselves suddenly plummeting to the ground amidst the debris of the failed deck.

(2013) In Dartmouth, NS 16 people were on a deck at a party when it collapsed with 2 people standing underneath the deck at the time. Four people were seriously injured. See full article on the Chronicle/Herald website.

(2013) In Boston, MA about a dozen fine art students gathered on a 3rd-floor balcony at an art opening were suddenly and unexpectedly crashing down to the 2nd-floor deck. Luckily, nobody was seriously injured. See full article on wcvb.com.

What Causes Decks to Collapse

Initial responses for inquiries on what causes a deck collapse are commonly quick to question if the deck was built to code with proper permits and inspections but it appears that most times there is no negligence in that area. While there are several possible reasons for the deck failure, more often than not, the failure is attributed in some way to the ledger board that connects the deck to the building structure.

The connecting hardware securing the deck to the house is often the first item to be checked. While inexperienced deck builders may use inadequate nails to secure the deck ledger board to the rim joists of the house, more often than not the correct anchoring fasteners were used. What then causes the fasteners to pull away from the house? Often the culprit is wood rot. When water invasion has weakened the wood to the point of softening or rot, no fastener is able to perform securely.

When some homeowners (and inexperienced deck builders, for that matter) think about deck waterproofing, the focus of the consideration is often the deck surface or the railings and the esthetic value waterproofing brings to outdoor living space. Sadly, it is the critical inside perimeter waterproofing details that are neglected that can allow water to infiltrate the deck components and the building envelope which can compromise the structural security.

Many times, water intrusion and wood rot is discovered before weakening to the point of collapse and the deck can be salvaged, but sometimes the water damage goes unnoticed. When this happens for too long, eventually the rot will deteriorate the wood until the deck becomes unsafe (This seems to be more common in circumstances where the owner or manager of the property is not the primary resident, such as in the vacation beach home deck collapse in Ocean Isle Beach, NC in July 2013). 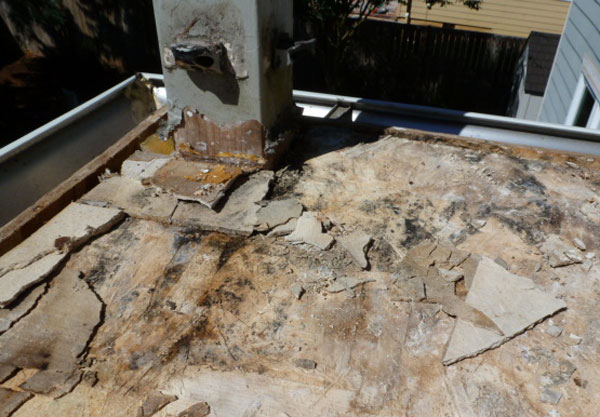 When water invades a deck’s substrate it can literally crumble under the surface.

For example, see Duradek Case History #151 where the inside perimeter waterproofing details were previously neglected and threatened the structural integrity of the deck. Luckily it was noticed and repaired in time to salvage some of the deck, and most importantly, avoided deck collapse and injury.

If you would like to have a Duradek waterproofing professional provide a free estimate on renovating your deck, contact a Duradek dealer in your area.

For further information on the topic and study of deck collapse, check out the Barrie Home Inspector website article “Deck Collapse Is Your Deck Safe?”.