There were several issues with this existing deck. The prior owner had done repairs around the parapet wall which compromised the perimeter seal of the waterproofing. Rather than replace all of the vinyl, a vinyl border/extension was glued to the existing vinyl around the perimeter and up the parapet wall to keep the waterproofing function of the vinyl surface intact and also serve as a decorative border.

The wall was then finished with stucco, and both the original vinyl and the border layer were eventually covered with a deck paint. 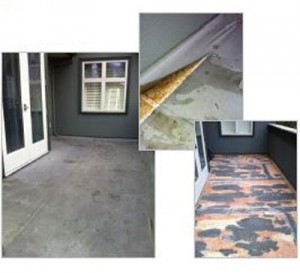 After many, many years it is time to replace the vinyl on this balcony.

The seams where the border layer met the original layer were lifting, so the vinyl had to be removed and replaced, but the project could become very costly if the (relatively) recently stuccoed parapet walls and balcony door had to be removed to complete it, which normally is standard for guaranteed waterproof performance.

The old vinyl was cut around the perimeter, leaving the original vinyl tucked up under the stucco wall with about an inch extending from beneath it. The old vinyl was removed from the deck surface and while some delamination of the plywood occurred, with some filling and sanding the plywood was able to be re-used. (For specific details, see Duradek’s Substrate and Edge Trims). 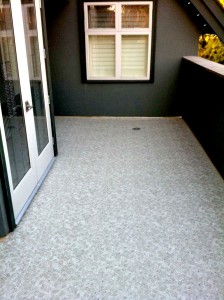 New Duradek Forest Floor Birch was applied and the seams were properly welded to provide a waterproof layer, with special care given to where the new vinyl was carefully welded directly to the old vinyl that was left tucked up under the stucco and threshold, eliminating the need to remove the stucco or the balcony door. A mechanical fastener was also used to ensure the old and new vinyl will remain securely in place up the vertical perimeters, and to prevent any possible shrinkage at the deck/wall intersection.

Although this was not the ideal way of waterproofing the deck area, it was an adequate solution to the homeowners’ problem, taking their budget into account.

Ideally, removal of the stucco from the base of the wall would have been the preferred method of waterproofing the deck area, but that would have at least doubled the cost of the repair.

To complete an installation like this requires a very patient, meticulous and experienced installer.